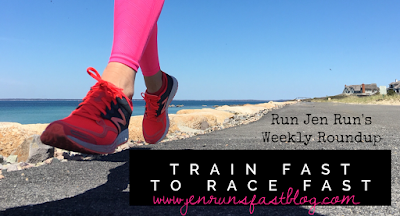 Two weeks have gone by and I’m progressing!  I’ve been able to try spinning and… wait for it… running!  My physical therapist Kathy had me start run/walking and now I’m up to 3 miles!

·      For the second year in a row, I got to see BibRave Pro Eric as he ran through my town during Ragnar Cape Cod!  Always a treat! 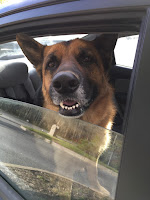 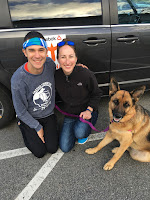 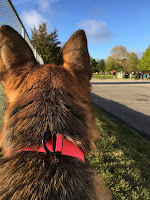 ·      On a GORGEOUS 85 degree Friday, I met up with my coworker Craig and tried paddle boarding for the first time!  The water was cold and I was terrified of falling in but I had a blast!  My goal is to partake in more “activities” this summer… 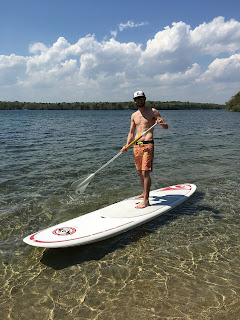 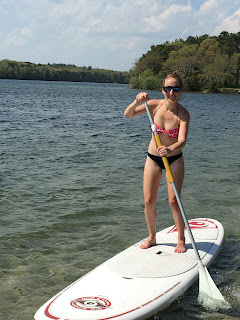 Yesterday was the 8th Annual Piggy Trot for the Glenna Kohl Fund for Hope and my 7th year in a row running!  I love this race, the course, the cause—and I’m always excited for Piggy Trot morning. 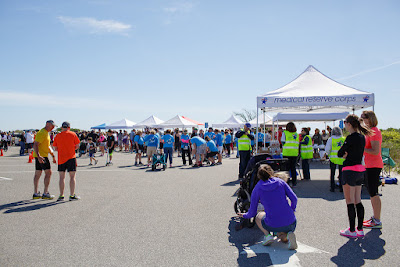 As you know, I’ve been injured.  My physical therapist has only given me the ok to walk/run every other day up to 3 miles total.  The Piggy Trot is 3.7 miles. 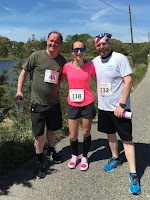 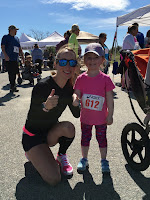 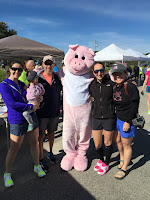 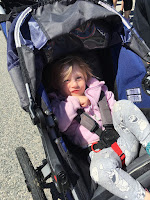 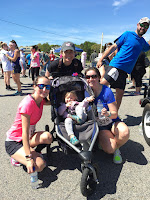 While the original plan was to pace Eric and hopefully race to another pig trophy, I rewire my brain to make this a fun run.  I’m always lucky to have my mom and a bunch of work friends and run club friends running this race so this year I tagged along with Allison—who was stroller running, pushing Catherine.  It did turn into a walk/run for real because Catherine kept throwing her stuffed animal out of the stroller and then she wanted water… didn’t want water… wanted water… didn’t want water… and so on. 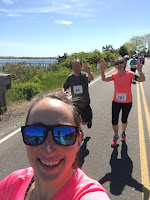 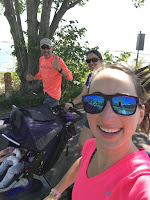 My mom started with us then kept running during one of our stops.  Once she hit mile 3 she started walking and we caught up so we all could cross the finish line together!

Up next: Buffalo Half Marathon in Buffalo, NY on May 28th!

Hey guys!  It’s been two weeks since I last posted a Weekly Roundup and I still haven’t tried running a step.  This injury has been super frustrating and is making me crazy.  It’s always worse when you CAN’T do something versus when you just don’t want to.  I was diagnosed with an abductor strain.  For awhile I was getting a lot of referred pain down my leg and to my piriformis but now it is more localized.  Sitting hurts.  Standing too long hurts.  I also haven’t been able to spin.  I can’t jump around in pool class.  I wasn’t sleeping.  My appetite is suppressing (probably to a normal appetite 😂).  I lost about 4 pounds but I’m getting fluffy.  Not running sucks.

I’m trying to stay motivated and looking ahead to future goals—I signed up for Rock ‘n’ Roll Philadelphia in September—because I can feel Buffalo slipping away from me.  I may still be able to run the half Memorial Day weekend but I know I won’t be able to race.  I’m being a good little PT patient and doing all my exercises, stretching a ton, rolling every day and getting in the pool a few times a week.  Kathy has been awesome—spending so much time with me, being so accommodating and putting me to WERK.  So many glute exercises!

While healing is slow, I am sleeping through the night and definitely getting stronger.  I used the elliptical pain-free this weekend and finally was able to go long enough to sweat on Sunday!  Baby steps.  It’s hard to remember sometimes but small progress is still progress.

·      I signed up for Rock ‘n’ Roll Philadelphia!
·      I’m getting new floors!  Last weekend I helped my dad rip up the kitchen.  Georgie supervised and I took out all the nails. 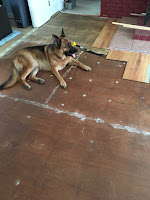 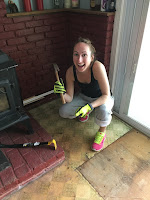 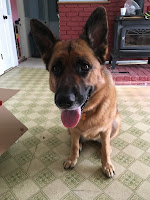 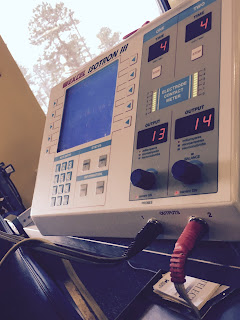 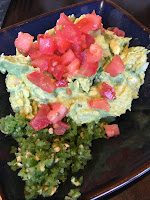 Because today is Cinco de Mayo! Its authentic Mexican flavors with a Cape Cod spin easily puts Anejo at the top of my list for best restaurant in Falmouth.  Make sure to order the tableside guac and save room for the fried ice cream!

Physical Therapy
Injuries suck.  Not running sucks.  I’m going crazy but physical therapy works.  Slow progress is frustrating but progress is progress and I’m happy to be getting stronger and a little more pain-free every day.

How Bad Do You Want It by Matt Fitzgerald

It’s been awhile since I read a really good book but my coworker Eric brought this in for me and I’m hooked.  I’ve always struggled with the mental aspect of running and I’ve often let it get the best of me.  This book uses real examples from elite athletes to help readers find and develop their own mental toughness.  From the introduction…
“Not all endurance athletes are head cases, but given the nature of the sports in which they participate, all endurance athletes face psychological challenges, and all such challenged are either directly or indirectly related to perception of effort.  If racing wasn’t as hard as hell, athletes would not experience moments of self-doubt, or pre-race apprehension, or post-race regret, or mental burnout, or intimidation.  Even most training errors, such as overtraining, originate in the fear of suffering.” 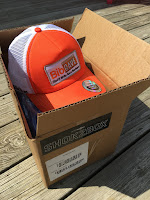 The Spring #ShokzBox
Duh!  BibRave and AfterShokz put together the Spring #ShokzBox filled with the hottest running gear from Orange Mud, Knuckle Lights, Buff and Brilliant Reflective and I’m obsessed.  I got a sneak peak through an opportunity from BibRave and I’m looking forward to spreading the love and gifting it to my dad.  Priced at $199 (a $285 value), the Spring #ShokzBox is only available from 5/1-5/14 and quantities are limited.  Check it out here: http://shokzbox.aftershokz.com/

Marshawn Lynch
Oh. Em. Gee.  I can’t get enough!  Arguably one of my favorite players ever in the NFL, Beast Mode is also the ugliest dude in the NFL but I LOVE HIM.  I am so excited to see him in an Raiders uniform because he is really really really from Oakland doe.

That’s all for today.  Check back on the first Friday of every month for 5 more of my favorite things!