It’s the 2-month anniversary of my Christmas Eve Turkey Encounter and as I look back on the traumatizing event, I decided to do a little wild turkey research with the help of the National Wild Turkey Federation.  Go ahead and click on the link.  Such a thing really exists!

·      Wild turkeys are the official game bird of Massachusetts.  There are over 7 million wild turkeys in the United States today.  The species almost became extinct in the early 1900s and were completely eliminated from Massachusetts in 1851 due to hunting.

·      Courtship begins during the winter months and it is considered mating season from February to April.

·      Turkeys usually feed in the early morning and afternoons. 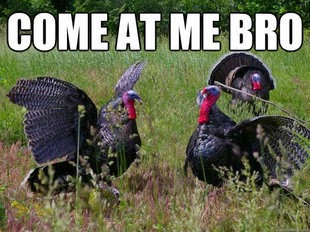 You can all form your own opinions but from the view of a survivor, turkeys are evil creatures.  They have been known to terrorize postal workers and attack innocent human beings.

In the fall of 2008, there were daily attacks on postal workers on South Street in Rockport, Massachusetts.  One mail carrier made national news in August 2009 when he used his pepper spray to fend off an attacking bird.

Today wild turkeys are seen together in “gangs” all around Cape Cod after being reintroduced to the Cape in 1989 via Camp Edwards and the Cape Cod National Seashore.

I read a lot of advice but most sources agree: don’t feed the birds and stay away.

What should you do if a Wild Turkey Attacks?

·      Be Aggressive.  Don’t let those giant birds intimidate you.  Make loud noises and wave your arms.  A broom is a useful tool to swat them away.  An umbrella can be used to mimic a male turkey spreading its tail feathers and bully an attacking turkey.  I don’t know about you but I run with neither a broom nor an umbrella.

·      Turkeys usually avoid dogs.  Another reason why I need a puppy!

I hope this is the last time I ever have to post about any type of bird but I'd love to hear your stories.  Stay safe out there my friends!