My Training Partner is a Work in Progress

From the moment I brought Georgie home, I knew we were going to be best friends and I dreamed of the day she was old enough to start running with me.

Getting a puppy is so exciting but living with Georgie has not been easy.  She’s a smart, stubborn dog with a lot of energy.  She came with some health issues along with your typical German Shepherd traits and characteristics which we need to work on every single day.  We have good days and we have bad days.  Now that she is almost 2 years old, thankfully those bad days are further and further apart.

So one of our issues—My dog doesn't like bikes.

She is ok with a stationary bike, but the second it starts moving, keep your distance.  Scooters, skateboards and dirt bikes have the same effect.

For that reason, I don't take Georgie to the bike path.  We avoid busy places in the summer.  We practice distractions at home.  I am always running on alert.  We cross to the other side of the street when we see someone else walking or jogging on the same side of the road.  When I see bikers coming (I usually do before Georgie because she has her nose in the ground) we veer off into a random driveway or hid behind a tree and I put her in a sit and try to distract her with “touch” or treats.

My dog also bites me.  I know it’s not intentional.  It all makes sense to me why she does and it’s usually things that I could have and should have controlled.  My trainer (Sara Marshall at Paws in Translation) talks about trigger stacking.  The idea behind trigger stacking is that there isn’t one thing that causes Georgie to act out and use her teeth.  It’s many little things that add up and put her over threshold.  For example: we see a biker, a husband and wife walking, a dog barking in the yard across the street, a super windy day, etc.  Then we pass the random man standing on the sidewalk—something that would not normally faze her—and she goes over threshold causing her to jumps at me and grab my arm.

Now I know what you’re thinking—and please don’t worry!  She has never actually hurt me.  I can probably recall 3 or 4 “really bad walks” total but now I can see the signs ahead of time before we get to that point.  She has a way of letting me know when she is uncomfortable or under stress.

Today's run really pissed me off and I feel the need to blog about it.

So when they were gone, we started down one of the side roads.  We went around a curve and I just happened to turn around to see an older man on a bike FLY by us.  He was on the same side of the road as us going in the same direction as us.  He actually really scared me because I didn’t see or hear him and I know this also freaked Georgie out.  She started barking and we both started running a little faster following the biker.  The biker never turned around and before we knew it he was out of site.

About a mile later we were running over a bridge and I saw the same guy coming at us.  He was on the same side of the road as us but this time going in the opposite direction.  (I just thought of this—why was he on the wrong side of the road?)  But anyways, we were in the middle of the bridge with nowhere to go.  I made her sit.  I pulled out the cheese—which she had no interest in—and she kept a close eye on him until he got closer.  She started barking and he yelled at us “YOU NEED TO GET THAT DOG TRAINED.”

I actually think this was the same biker that Georgie barked at a few weeks ago and then he stopped and parked his bike about 10 feet from us while we were taking a water break to just stand there and stare at us while Georgie continued to bark. He muttered something to us then too but I couldn’t hear it.

This man really made me mad.  From my perspective, I was happy that even though she barked, she stayed in her sit.  She has a mean bark but she was on leash and she didn’t lunge at him.  Again, she’s a work in progress.  It’s a lot of patience and practice and someday we will get this down.

So to all the bikers out there, I’m sorry my dog barks at you.  And I’m sorry she occasionally will lunge towards you if you come out of nowhere and scare us both.  But she’s on leash and we are both in training.  Help us get over this fear of bikes and don’t be an asshole to make our training sessions even harder. 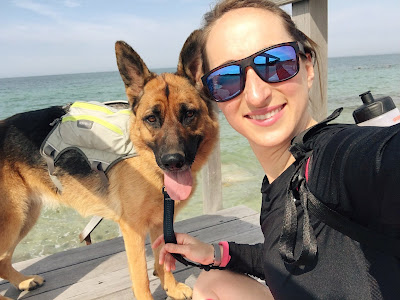