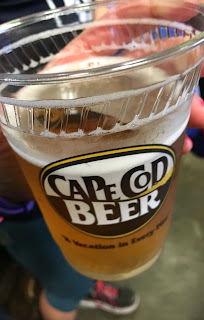 So I’d be lying if I told you that yesterday’s 10k PR at the Cape Cod Beer Race to the Pint was a surprise.  There aren’t many opportunities to run the 10k distance around here and my previous PR came at the Tufts 10k for Women on a day that I wasn’t feeling 100%—most of that was mental.

My goal for the half in Buffalo is going to be somewhere between 7:00 and 7:10 pace so I wanted to run this 10k under 7:00 pace.  If I could do this, I would PR.  If I could PR, I knew it would be a big confidence booster and confirmation that I was on track with my training.

When I signed up for this race last month I was really looking forward to it.  A bunch of my Run Club friends would be there and at the time the 4pm start sounded wonderful.  Fast forward to race day I HATED waiting around until 4pm.  It was a cold, damp, misty day on Cape Cod and all I wanted to do was lay on the couch.

BUT I got myself out the door—and I’m really glad I did.  I met up with Danielle, Jason and their friend Pat in the parking lot and we went in to grab our numbers, long sleeve tech shirts and Cape Cod Beer pint glasses.  We went back and forth deciding what to wear but after a quick warm up with Jason, I knew I would be warm enough in shorts and a long sleeve.

The inaugural race was big!  700ish runners combined for the 5k and 10k.  The race started and finished at the Cape Cod Brewery.  The course itself was pretty boring but that was kind of expected for that area of Hyannis.  The 10k ran the 5k loop twice.  The loop wasn’t quite 3 miles so there were 2 little side roads that we went down and back up.  The sharp turnarounds were brutal.  I had to swing super wide but I still worried that I would slip.  The 5k/10k split was SO CONFUSING!  I had no idea where I was going and if I was supposed to be following the 5k runners.  There was a mini loop, unmarked, that I am pretty sure some of the 10k runners skipped due to lack of signs and race support.

I was the second female heading to the 5k/10k split but I had no idea if she was stopping or continuing on.  She finished—along with the few other guys around us so I was on my own heading into the second loop.  I ran the 4th mile alone, passed a few guys on the BIG hill and then started catching up to the 5k walkers with about a mile and a half to go.  It was kind of fun passing them but also kind of annoying because most of them were walking 3-4 people wide so I had to run to the left of the cones on a busy Attucks Lane with cars coming up behind me flying by.  I sideswiped a few walkers (oops!) but I guess that’s better than a car sideswipping me!

Even the finish was confusing!  The 10k runners didn’t actually go through the finish line banner.  We had to make a sharp left right before it and finish near a rope with the finish line mat and a lady with her clipboard. 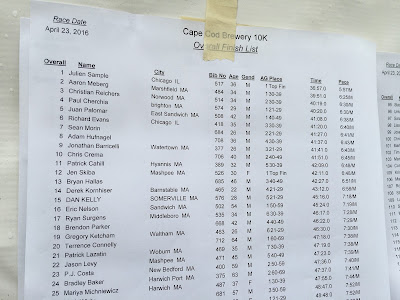 After the race, I found my friends—including Miss Catherine who we decided is my good luck charm.  I am 2-2 in winning races that she’s attended, the first being the Jingle Jog.  I treated myself to about a quarter of a bear (Cape Cod Blonde) before giving the rest to Gary.  We all had delicious tomato basil soup and bread with dipping sauce from Not Your Average Joes then stuck around for awards.  I won a coupon for a growler of beer and Danielle took home coasters for finishing 3rd in her age group! 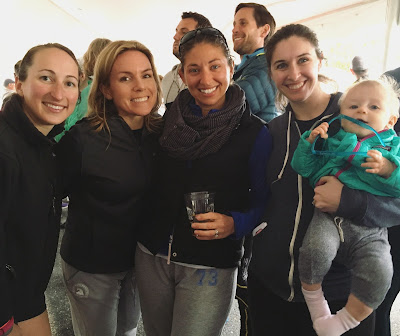 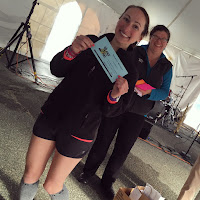 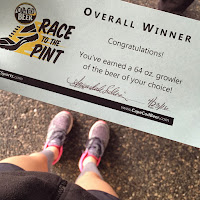 Thanks Eric and Stacey (@capecodrunner) for finding and sending me these two race pics from the Cape Cod Athletic Club Facebook page.  Note to self: I need to work on tucking my elbows in! 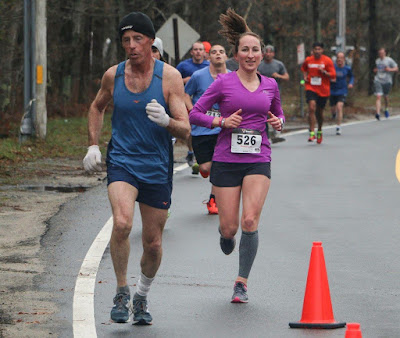